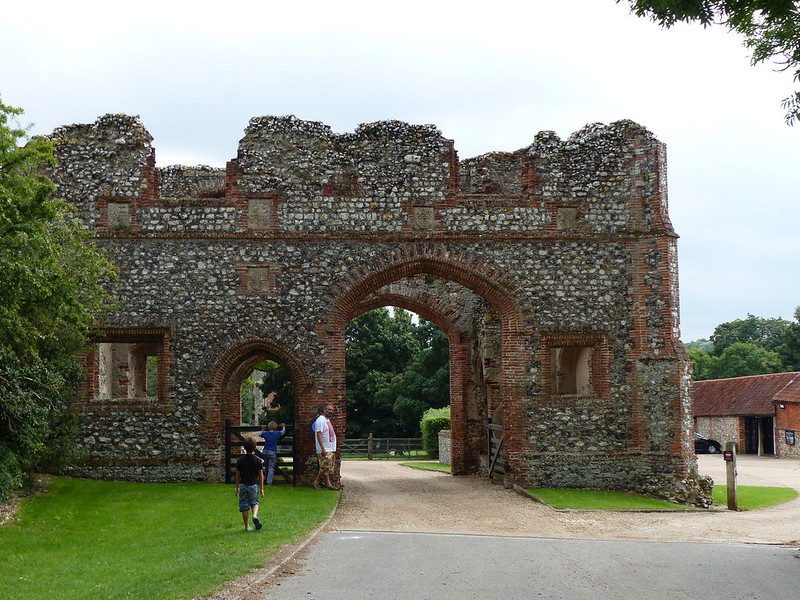 Having had a gander at Castle Acre and a wander around the village and the church, we still had one more treat in store: Castle Acre Priory.

First however, we had to say goodbye to my brother and his kids, who were heading back to Zurich via some old friends in London, and to my mum and dad, who were ready to head back to Snettisham. 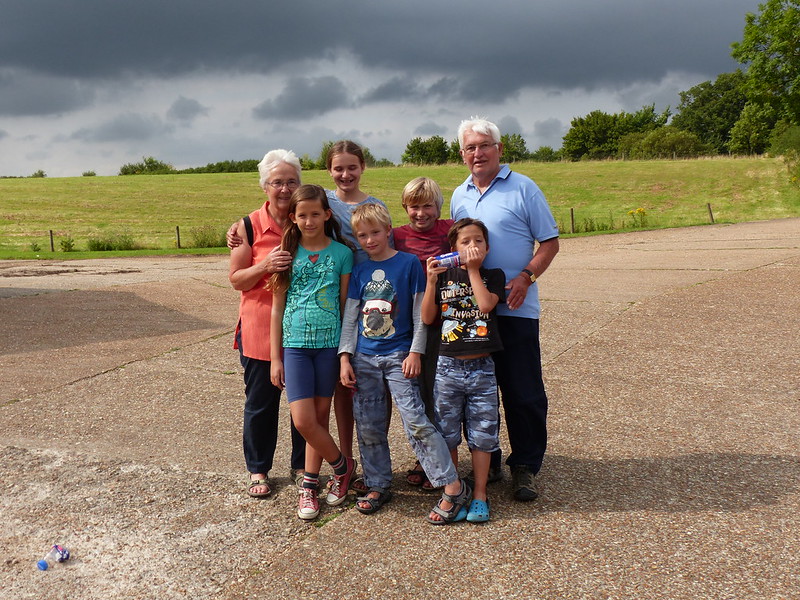 The priory is pretty stunning… 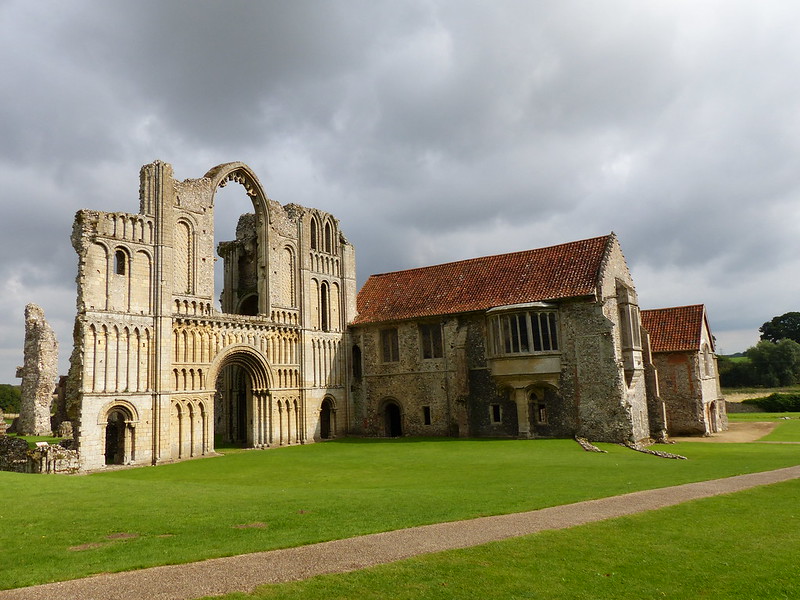 And, like the castle, had surprisingly few other visitors. 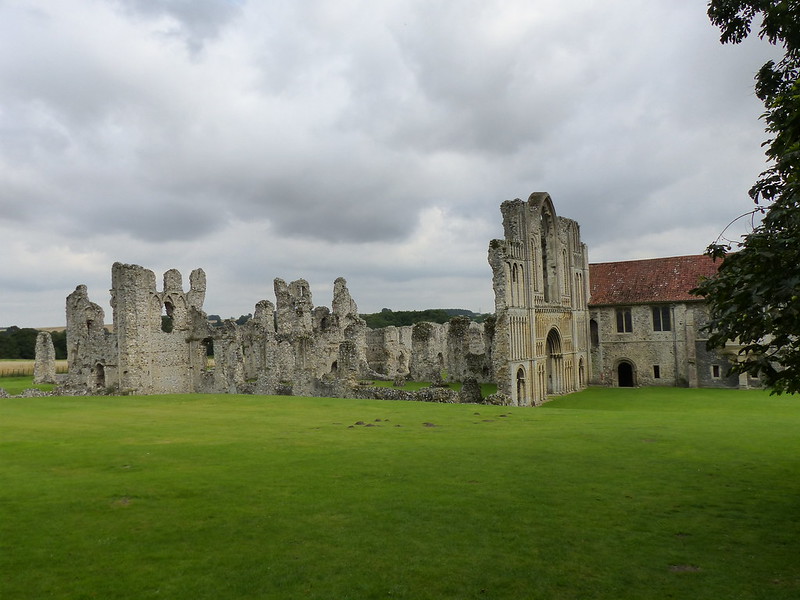 As ever at English Heritage properties, our visit was hugely enhanced by the audio guides, which brought the history of the priory and the monks who once lived here vividly to life. 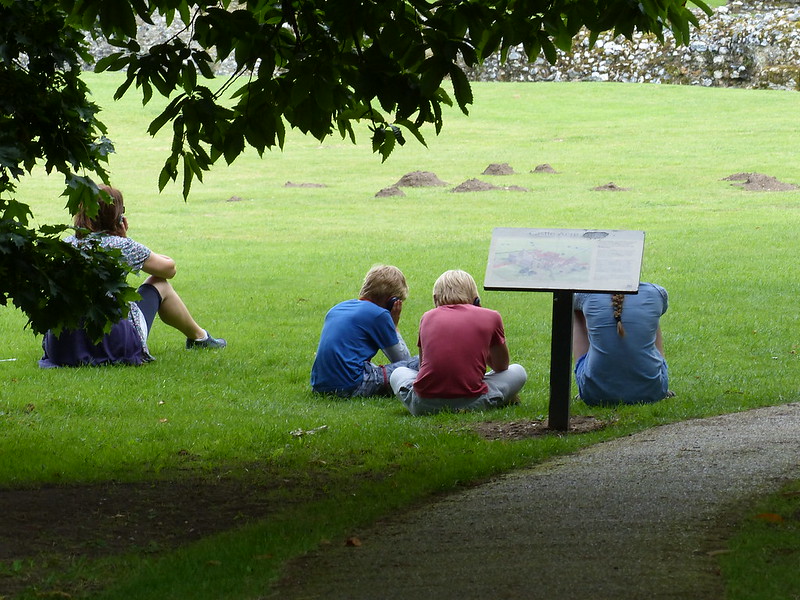 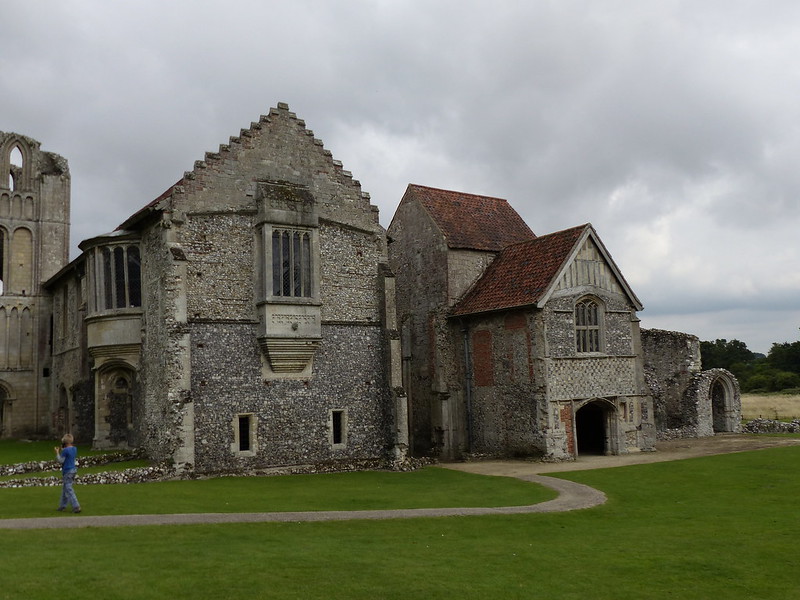 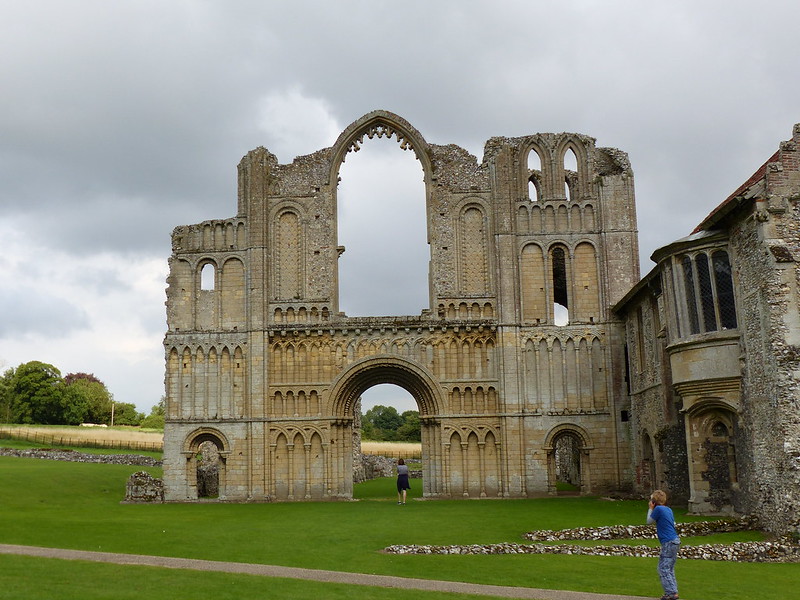 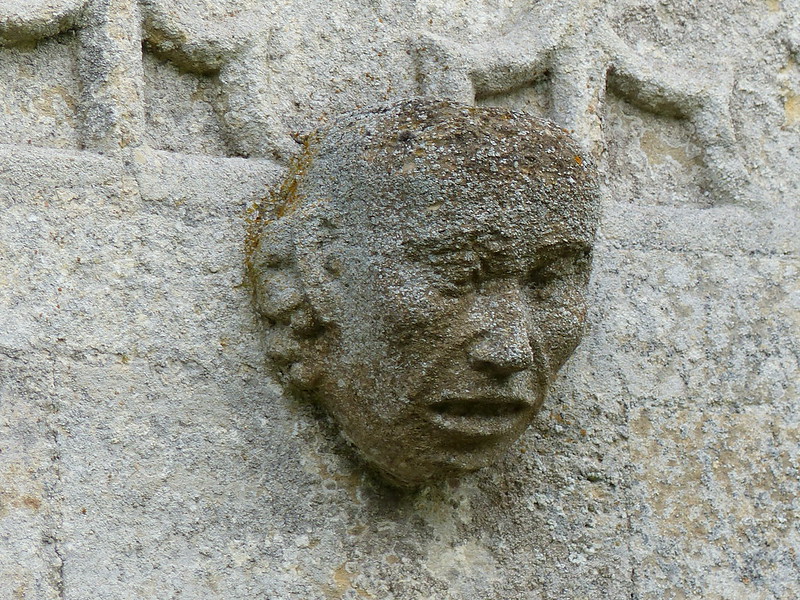 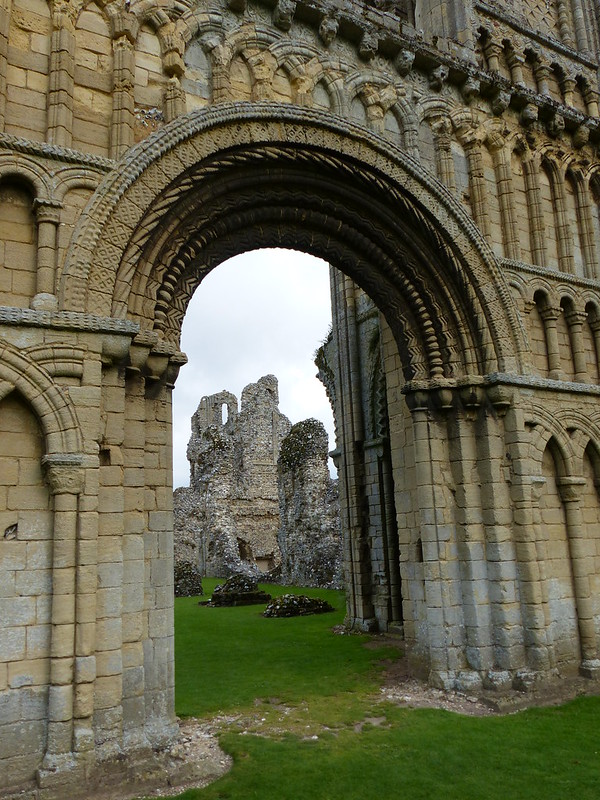 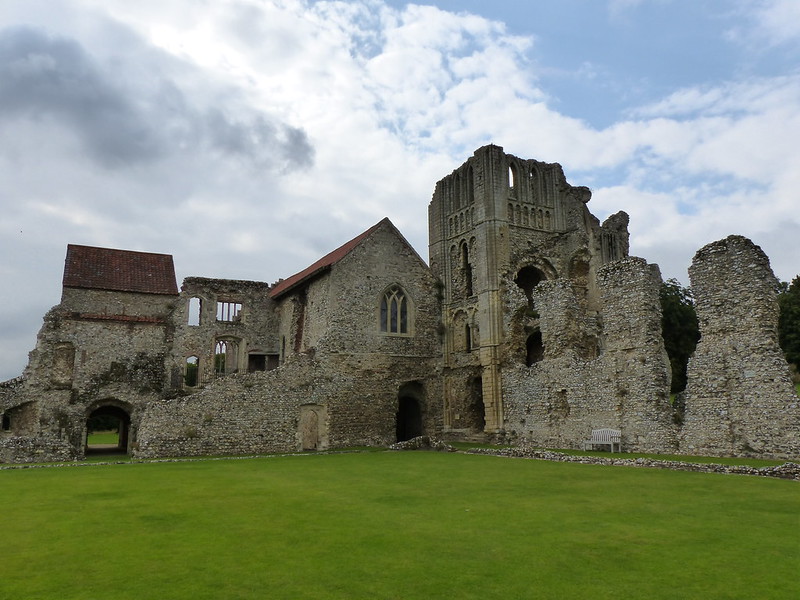 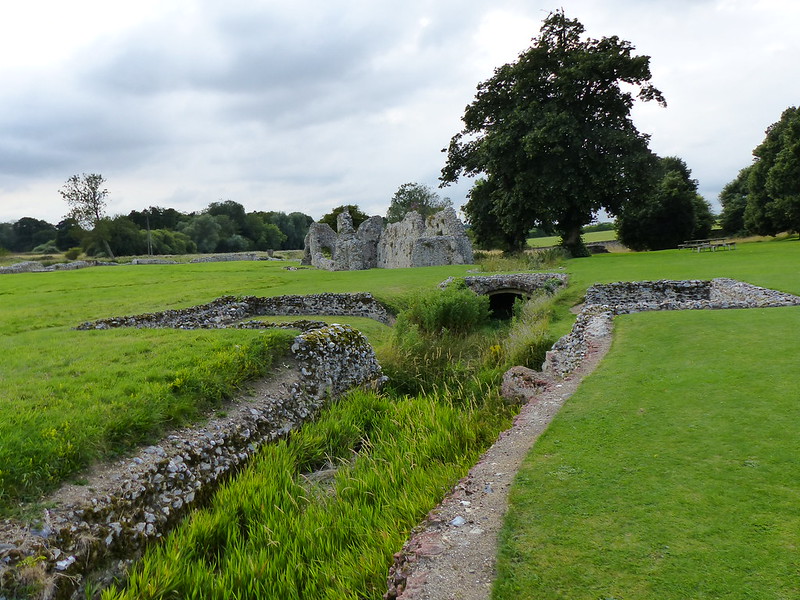 I was struck, as I was when I visited Furness Abbey, by the ingenious way in which water had been diverted through the Priory for use by the monks and then into fish ponds. 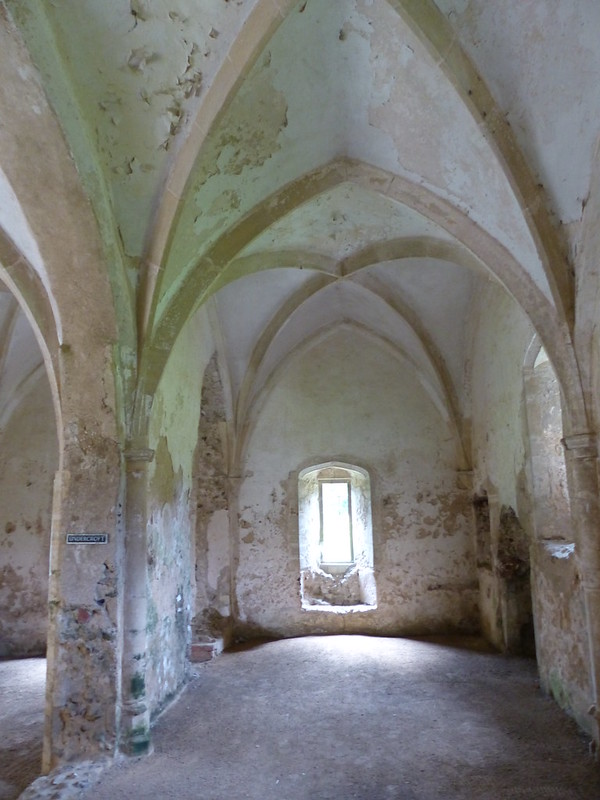 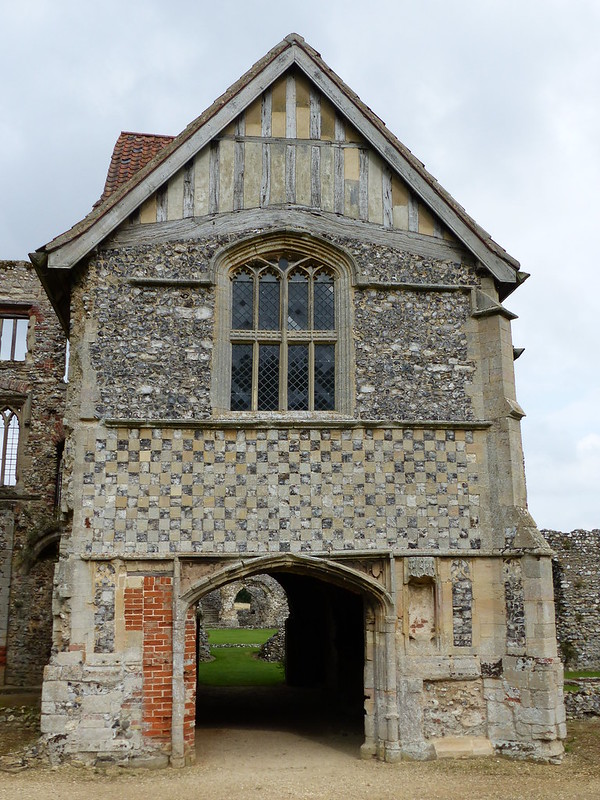 Here the local flint has been cleverly used to decorate the outer walls of the Abbot’s house. 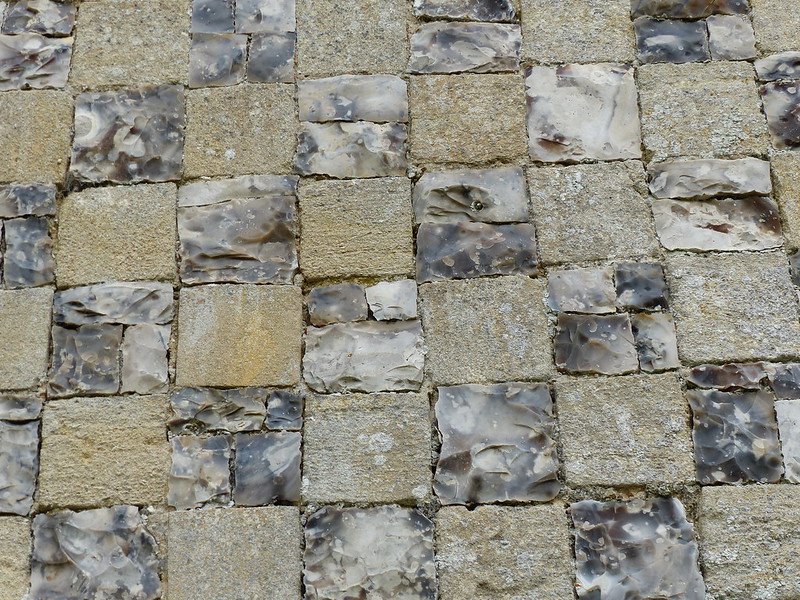 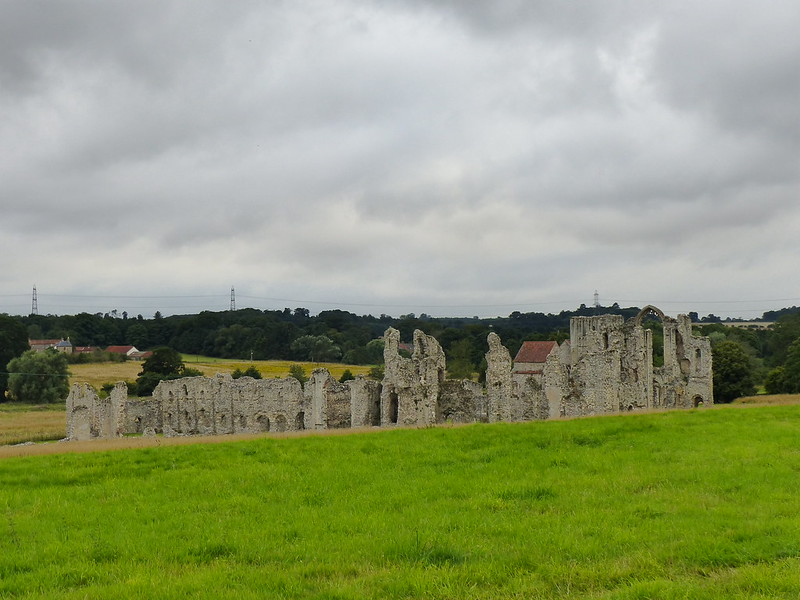 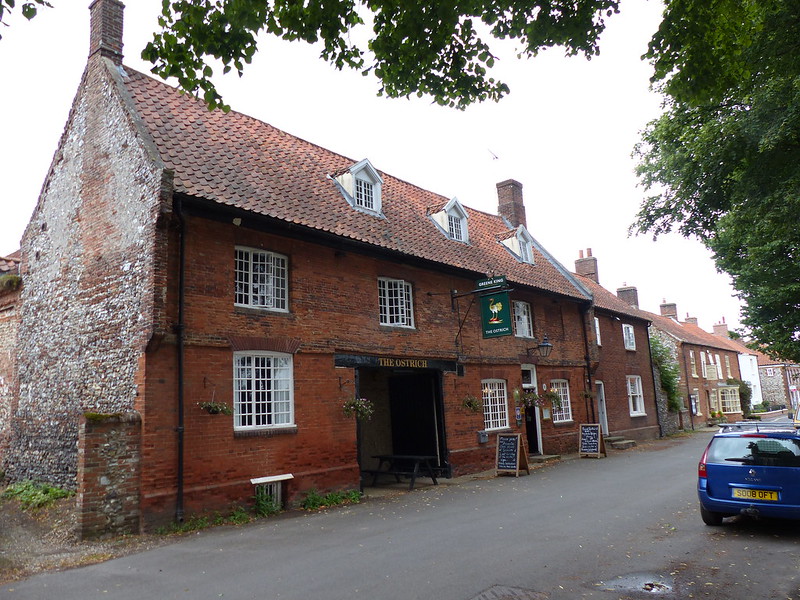 More scenes from the village – I don’t think that I’ve ever seen a pub called ‘The Ostrich’ before. I wondered whether it might once have been ‘The Ostler’?

Meanwhile the boys had never encountered a red telephone box before… 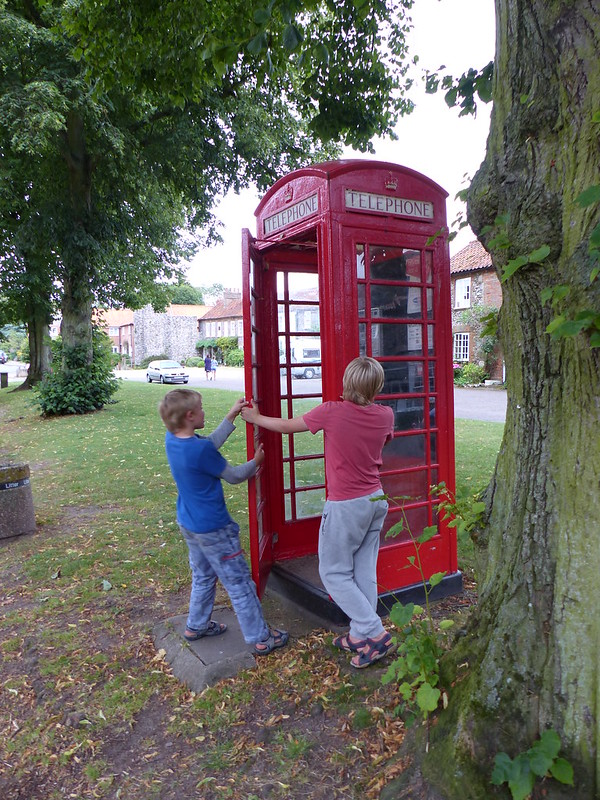 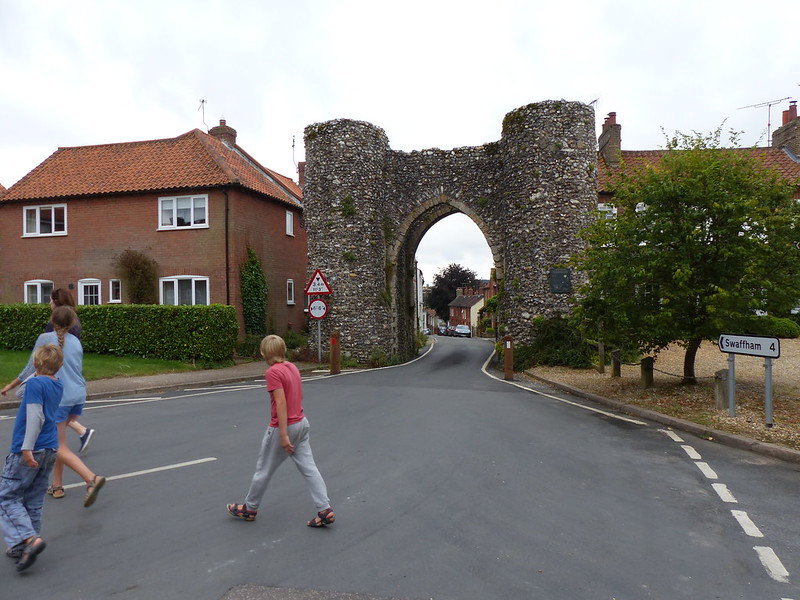 And that would be all I have to say about our visit to Castle Acre, except for the fact that it was a warm sunny day, and as at the castle, I was often distracted by the resident insect life. 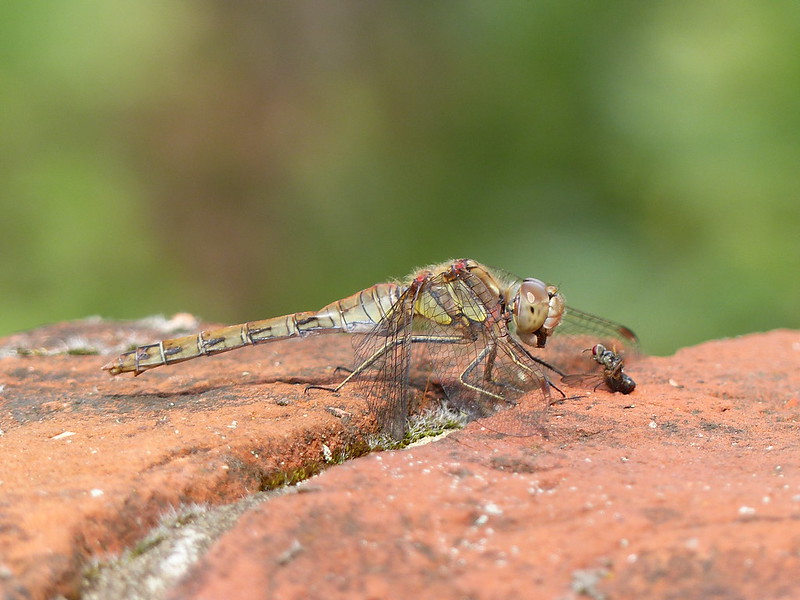 …was feasting on some sort of fly atop a wall by the entrance to the Priory.

In the little recreation of a walled physic garden by the visitor centre, there were Gatekeepers… 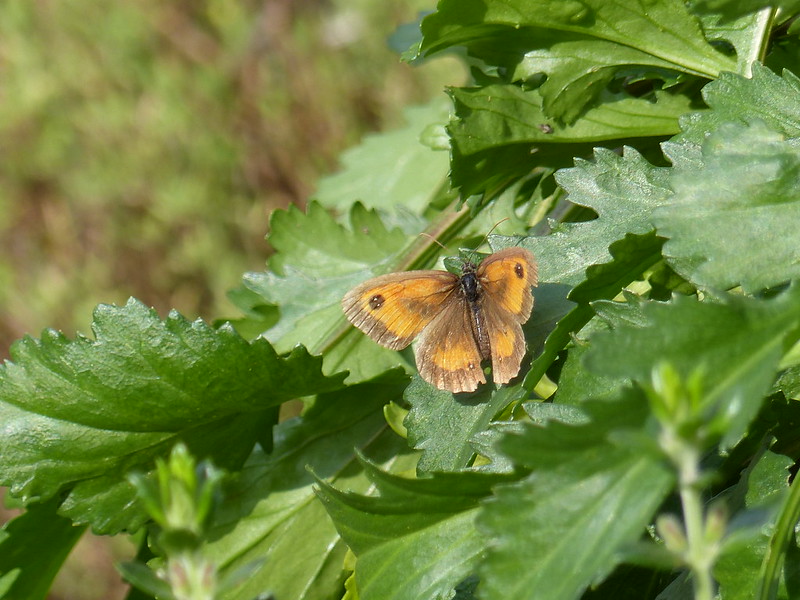 And these marvellous flowers (I’d really like to know what they are, as they were a magnet for insects – very tall, six feet or more, with large spherical white blooms) were host to many bumblebees and hoverflies… 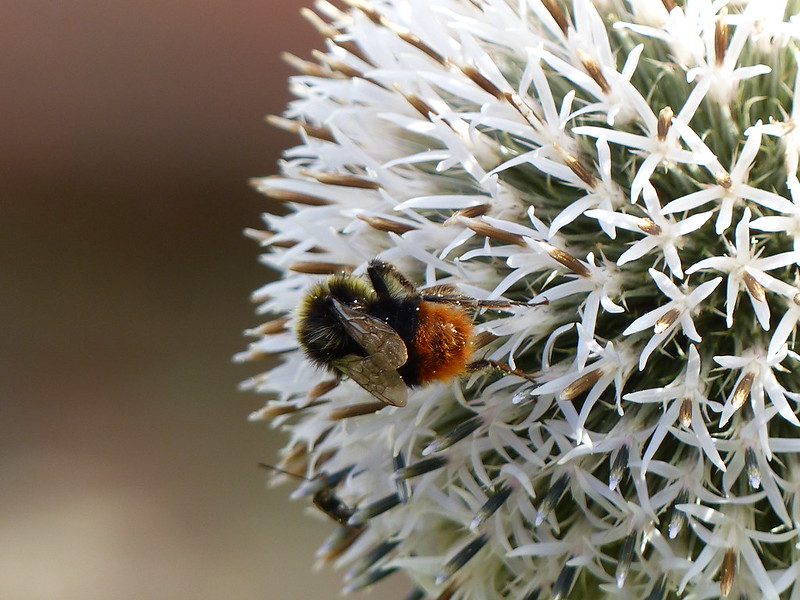 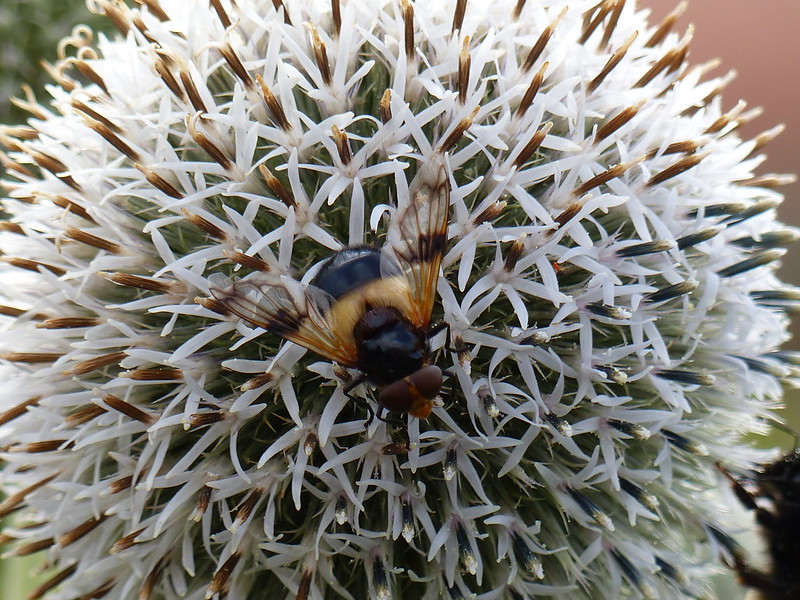 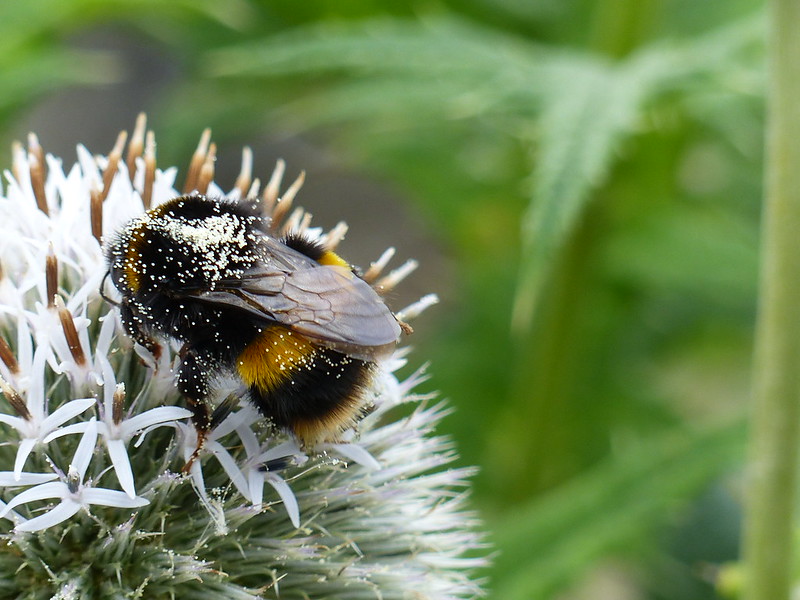 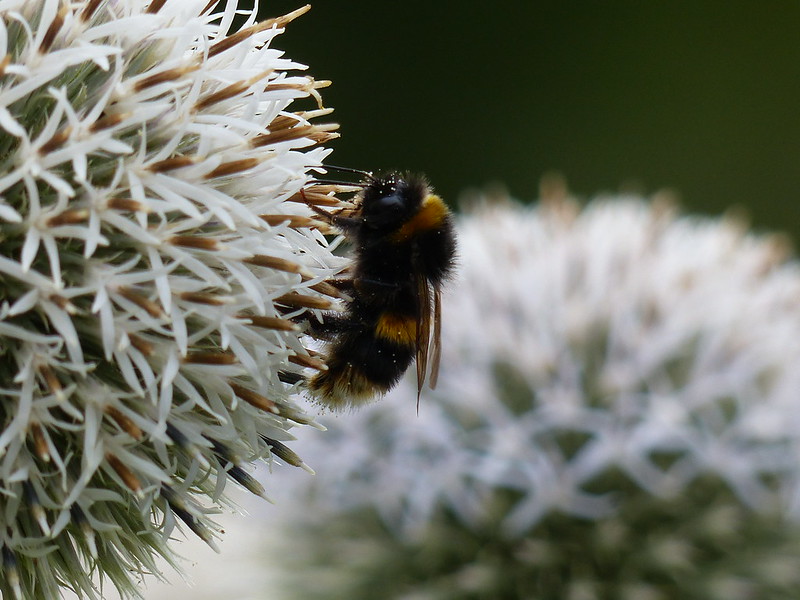 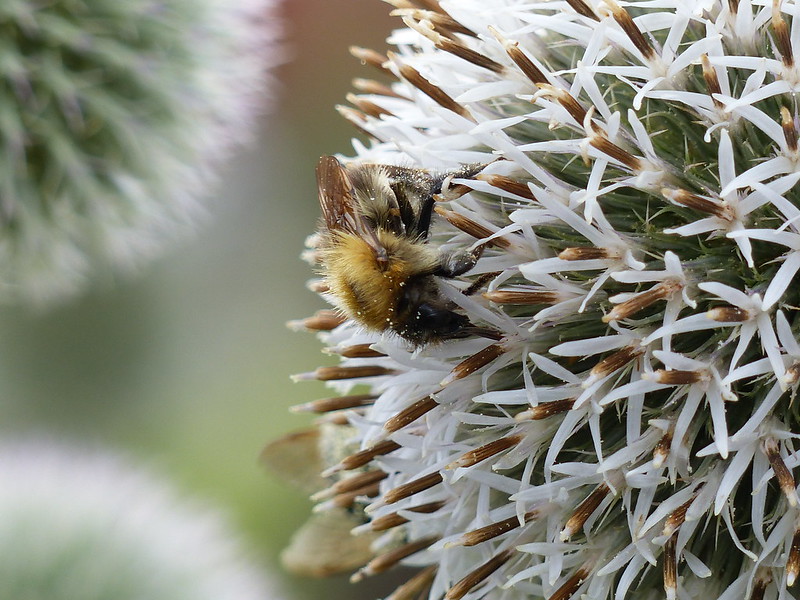 We were home from Wales long enough to wash some clothes and squeeze in a family party. Then A and B and I were off again.

My daughter A is really keen on her walking and, for a long time now, she has wanted to try a longer walk over several days. Naturally, I didn’t need any persuading and when we began to plan a trip for this summer, B, although he had some reservations, decided to join us. The choice of Hadrian’s Wall for our walk came after a conservation with my friend CJ on one of our Wainwright/Birkett bagging trips, when he told me about walking a section of the Wall with his son, who is close to A in age. Like CJ we chose to walk a central portion of the Wall, starting from Brampton and finishing at Hexham, both towns close to, but not on, the Wall, although in the event we actually finished at Chester’s Fort, a little short of Hexham.

The aim was to walk shortish distances each day, with plenty of time set aside for exploring Roman sites and looking around museums. Where necessary we used the AD122 shuttle bus to get to and from the Youth Hostels we stayed in. Had the weather taken a turn for the worse at any point, I wouldn’t have been averse to using the  bus instead of walking if that proved necessary to keep everybody happy. In the event, the weather was very kind to us. We had lots of sunshine, but also, quite often, threatening clouds, and it often looked like it was going to rain. On one occasion we saw flashes of lightening and heard rumbles of thunder. But when the rains came it happened overnight, or in the evening when we were safely ensconced in a hostel, or when we were in a museum, or a cafe. Only once in five days did the kids don their waterproofs and that was for a light, short-lived shower, which never really amounted to much.

Tucked away in my rucksack were a small ball, a light-weight cloth frisby, a pack of playing cards and a pocket kite. We didn’t get around to flying the kite, but we played with the other three a great deal, and when we do this again, I will take all four again. The kids had their own rucksacks with snacks, drinks, waterproofs and changes of clothes. After the first day, when B complained of sore shoulders, I carried his water bottle and some of his clothes, which seemed to solve the problem. We travelled very light, with a plan to wash our clothes in the laundry at Once Brewed hostel.

TBH and S dropped us off in the centre of Brampton. This is the Moot Hall (1817), now a Tourist Information Office. In the sunshine, it seemed like a very pleasant town, although we were soon out of it and climbing briefly, but steeply, up the Moat, the site of a former Motte and Bailey Castle.

The top is graced by a statue of George Howard, the 7th Earl of Carlisle, politician and poet, who corresponded with Wordsworth. The Howards lived at nearby Naworth Castle, so perhaps that’s why he’s memorialised here.

The guidebook we were using, Ian Smith’s ‘In and Around South Tynedale and Hadrian’s Wall’ (highly recommended), mentions the expansive view from the top of the Moat, but that view was interrupted by the mature trees which surround the summit. However, the next part of the walk took us along an avenue of trees following a ridge, from which we enjoyed the promised vistas.

After a slight navigational hiccup in a wood, we joined a road which led us to an old bridge over the River Irthing. A path along the banks of the river gave us views of…

If you were intending to follow in our footsteps, English Heritage membership would be a must, and this would be your first opportunity to take advantage of it. Part of the priory is still used as a church and other parts are ruined.

Much of the stone used to dress the priory came from the Roman Wall. There are a couple of inscriptions made by the legionaries who built the Wall.

The priory also has some Roman statues and altars on display. In the far windows in this room bored monks have scratched games onto the broad stone sills. We thought that perhaps they had been playing Nine Men’s Morris.

After the dissolution of the monasteries part of Lannercost was turned into a house by the Dacre family. Presumably, they were in favour with King Henry.

One of the buildings near the priory houses a farm shop and a cafe. TBH and S had driven to meet us and joined us for lunch. The kids discovered how much better a toasted sandwich tastes if it’s called a Panini (and priced accordingly). I had the chicken in a basket which was very good, and I didn’t have to change into flares and a kipper tie for the occasion.

The farm shop was a major disappointment. I’d envisaged local cheeses, free range eggs, baskets brimming over with fresh, succulent veg; I should really have expected knick knacks, chutneys, expensive short bread and general tourist tat. This was a bit unfortunate, since I had been hoping to stock up here on tasty local produce to make a picnic tea. Now we would have to rely on the hostel shop. Oh dear.

The priory through the old gateway.

A steady climb northward, out of the valley of the Irthing, brought us, for the first time to the line of the Wall. This section, west of where the Wall crossed the Irthing, was originally a turf wall, which was then replaced with a stone wall. There’s not much to se of it now, but our route did follow the large ditch which ran along the north side of the wall, and which after the wet summer we’d been having, was full of water in places.

When we did find an intact length of Wall, at Hare Hill, it was fairly spectacular…

…but that’s a little misleading, since this is the result of some Victorian reconstruction.

After that we were following a minor road, with some reasonably impressive remains alongside, including some turrets. Both the map and my guidebook suggested that we would be following the road all the way to Birdoswald, but in fact a new path has been created which follows the Vallum, another ditch and a mound built after the Wall, shadowing it’s southern side and as far as I can gather, providing a sort-of militarised zone between itself and the wall. On the Hadrian’s Wall National Trail navigation is a doddle. There are signposts and acorn markers galore, and in case that isn’t enough, the path has been mown to make it stand out.

This part seemed to have been so recently done, I kept expecting to overtake a man with a mower.

The children were beginning to flag when we arrived at Birdoswald, but I managed to persuade them that before we booked into the Youth Hostel….

….we should have a gander at the fort. The remains are extensive and pretty impressive. The Wall itself is also impressive here. This is one side of the Eastern Gatehouse of the fort, manned by a couple of apprentice auxiliaries:

The fort and the the hostel, with Hadrian’s Sheep.

Beyond the southern wall of the fort there’s a bench with a magnificent view looking over a steeply banked bend in the Irthing.

Birdoswald hostel has volunteer wardens and doesn’t provide meals. How did we get on at the hostel shop? Two tins of Cream of Chicken Soup. B wolfed down a bowlful, then some seconds.

“I don’t think I like tinned soup, Dad. What about you?”

It’s marvellous what an appetite will do. I had to give them the supplies I’d laid in for breakfast to supplement this Spartan offering. But I had high hopes for breakfast…..

Since, a little to my surprise, it wasn’t raining when I finished my Swindale walk, I decided to make a slight detour on my way home to visit Shap Abbey. I had it completely to myself. This tower is the most complete part of the ruins and is also the most recent part to have been built – but even this part predates Henry VIII dissolution of the monasteries, making it around 500 years old. Isn’t it odd that we’ll travel half-way around the world to visit ancient temple sites in exotic locations, but in the middle of a summer Saturday close to some of the nation’s tourist hot-spots this one would be deserted.