As travel restrictions were relaxed, Britain’s new found fervour for getting into the outdoors wasn’t abating at all. Old certainties regarding parking could no longer be relied upon. In the past, car parks would generally have spaces before about 10 and remote and less popular spots would never fill up anyway. On this occasion, we were meeting at the small parking space just off the A685, close to Low Borrow Bridge in the Tebay Gorge. At 9 it was already full, but I managed to squeeze in by parking behind a couple of friends cars, blocking them in.

All along that path, and, in fact, generally along the subsequent ridge route, we saw regular grey curls of…

Full of tiny bones and hair and often situated on a prominent rock or small mound by the path. I was confident at the time that this was Fox scat and I’m even surer now that I’ve had a chance to do a little research. For some reason the EWO took exception to my identification. I don’t know why he chose to argue, it’s not like I ever disagree when he’s pontificating about his chosen area of expertise, the weather. Oh wait – I always disagree when he’s opining about the weather. Fair enough.

Actually, I realise, that’s what the EWO have always done when we’re out for a walk together, hashing over the latest news in politics, or conservation efforts, or the measures around COVID19, or the most recent stupid fads in education, or whether the midfield can accommodate both Gerard and Lampard (we’ve been doing this for a long time!). I think it’s only by adopting a contrary position whilst gently arguing with the EWO or UF on a walk, that I know what I actually think about an issue.

It was my dad’s birthday, so I video-called from Grayrigg Pike and chatted with him and my mum and shared the somewhat hazy views whilst enjoying a cup of almond tea.

The weather wasn’t brilliant, but it wasn’t dreadful either, and with such good company and the ridge almost to ourselves it made for a very fine day.

It’s a lovely ridge walk this, not spectacular, but little walked. I was highly amused by the Prof, by far the youngest member of the party, who skirted around Whinfell whilst the rest of us went up, and then moaned in disbelieve each time he realised we had another ascent to deal with over Castle Fell, Mabbin Crag and Ashstead Fell (which has a number of knobbles to be ascended).

Aside from a pleasant leg-stretcher in good company, I’d been looking forward to this walk because Borrow Beck is a tributary of the Lune and therefore a part of my Lune Catchment project. I’ve never walked along the valley before and it didn’t disappoint. We even squeezed in one final brew stop on the banks of the beck.

All-in-all, a grand day out.

Andy’s account of the day, with somehow slightly less grey looking photos, and a map is here.

Advertisement
Whinfell Common and the ‘Other’ Borrowdale 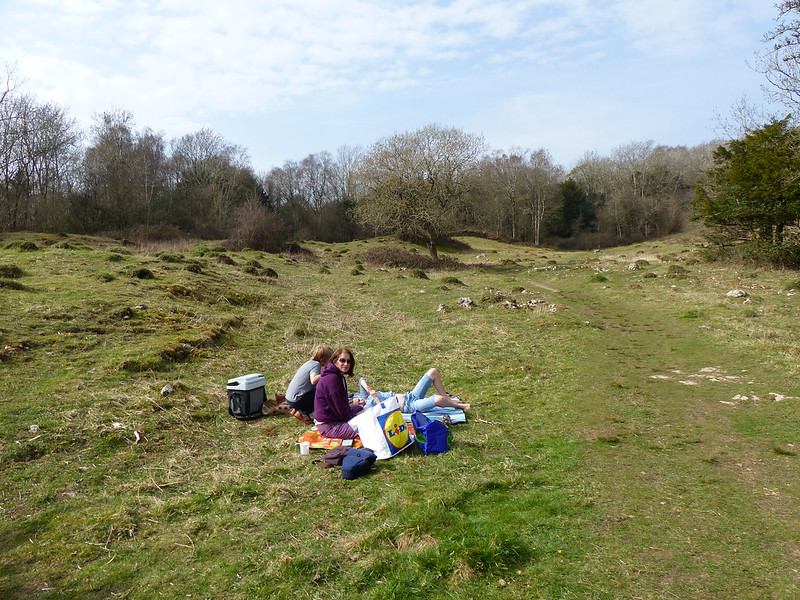 After Foulshaw Moss we travelled the very small distance to another Cumbria Wildlife Trust reserve at Latterbarrow. It’s a small reserve with masses of parking available on a section of the old road which was superseded by the current A590. It’s also a marvellous spot. And very quiet. In the couple of hours (or more) that we spent there we didn’t see any other visitors.

One of the striking things about the meadow here is the abundance (and in some cases size) of the meadow ant mounds. 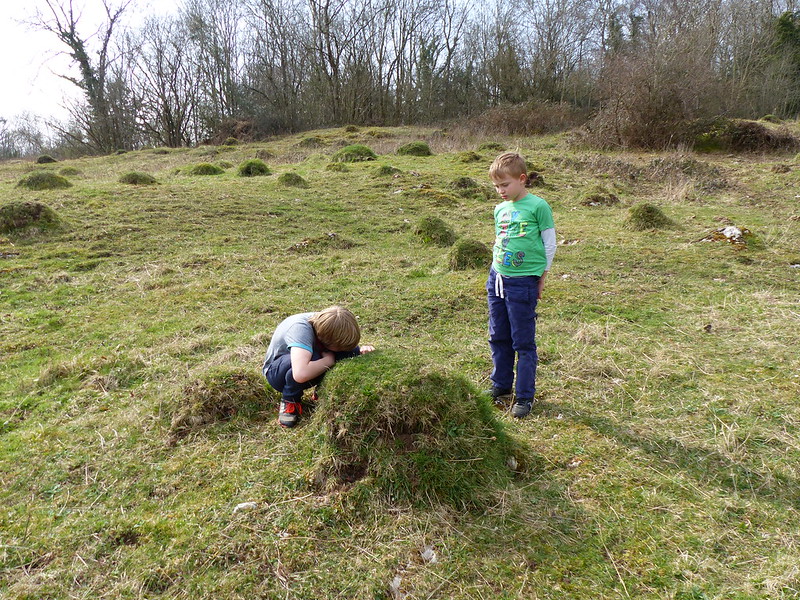 I’d been thinking about these kind of nests after Emily’s question regarding them in a comment and so now, with TBH and A content to lounge in the sun, the boys and I took the opportunity to investigate at leisure. 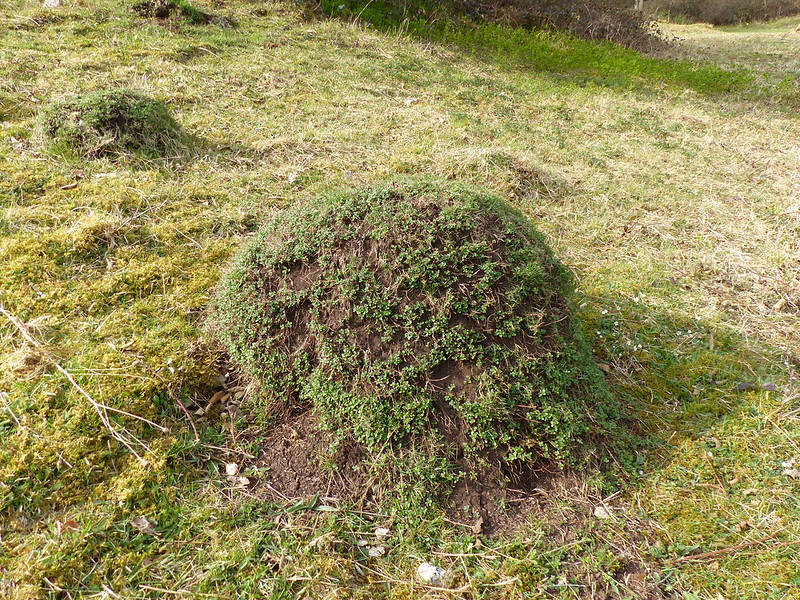 They’re composed of extremely fine soil and often have a slightly different mix of plants growing on them than the surrounding turf has.

This one had a very showy display of flowers of barren strawberry (looks really like wild strawberry but the big gaps between the petals are the give away – don’t wait here for tiny, sweet red fruit, they aren’t coming). 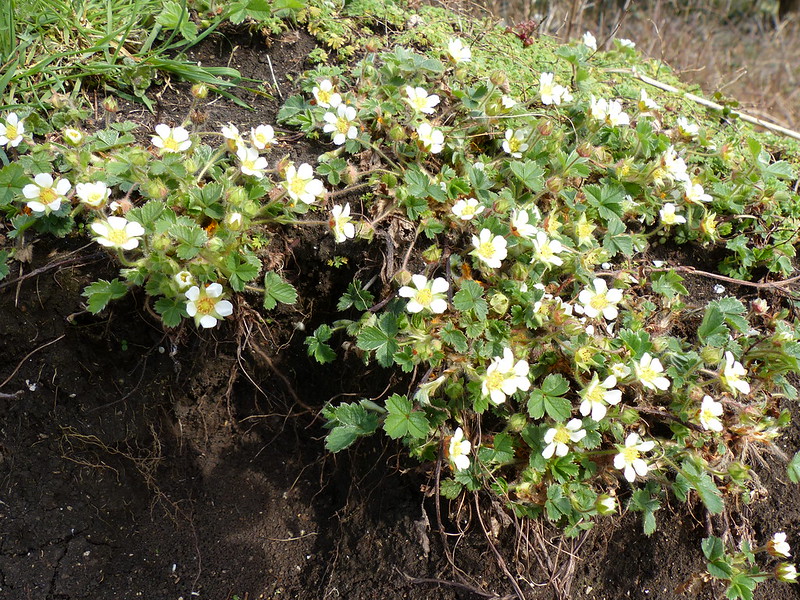 Of course, once you start to look closely, you notice other things – like this seven spot ladybird. Many of the mounds had one or two ladybirds. Ladybirds are predatory – I don’t know if they eat the ants, but they compete with the ants over aphids (which the ants ‘farm’ milking them for sap – there’s a fascinating description of this relationship in ‘Buzz In the Meadow’ by Dave Goulson). 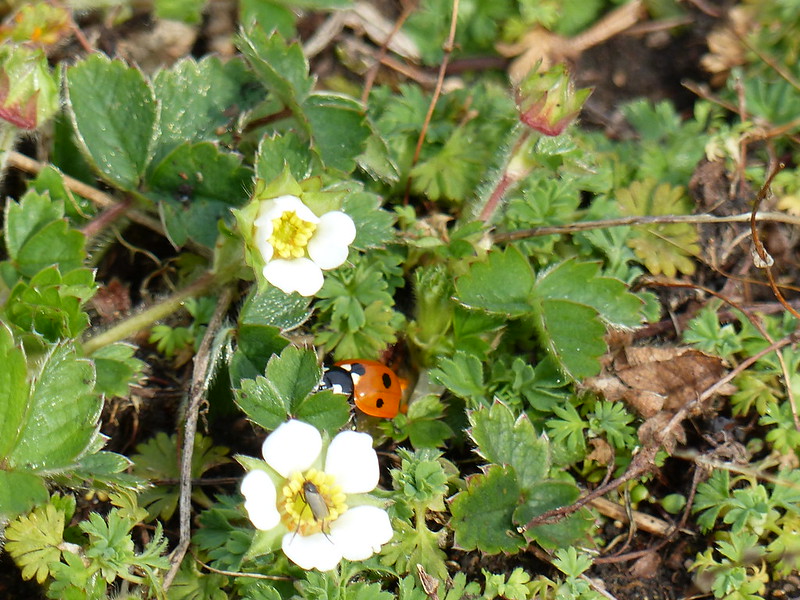 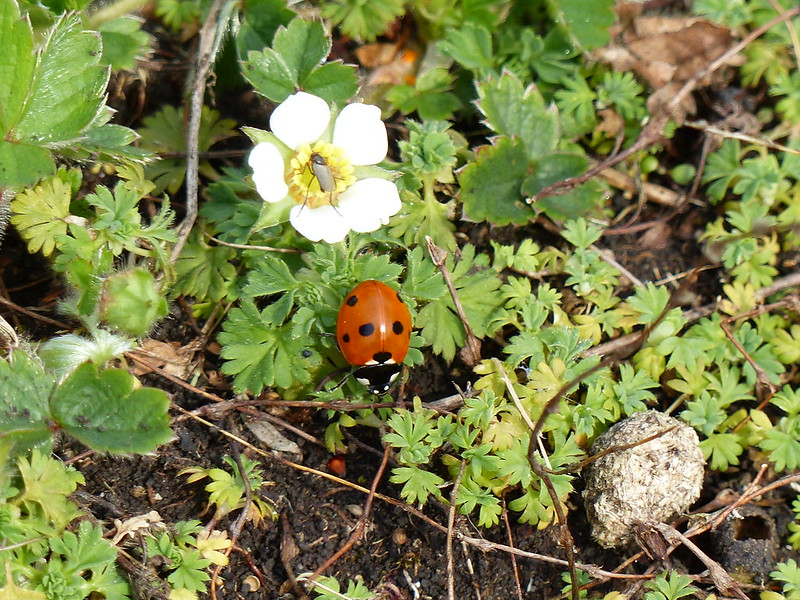 Look closer still and some of the barren strawberry leaves and stems have a coating of bright orange rust, a fungi, at least I think that’s what it is. 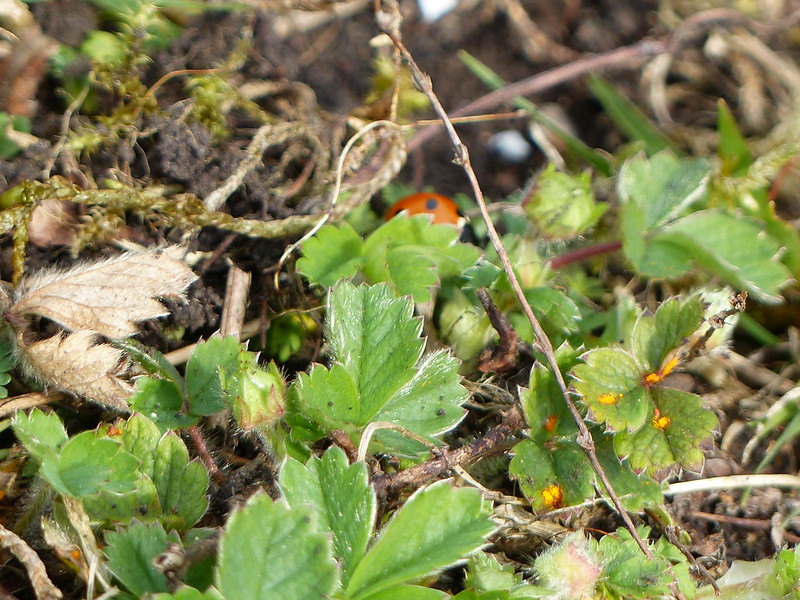 Many of the mounds have been savaged by predators a bit larger than a ladybird; both badgers and green woodpeckers are apparently fond of snacking on meadow ants. 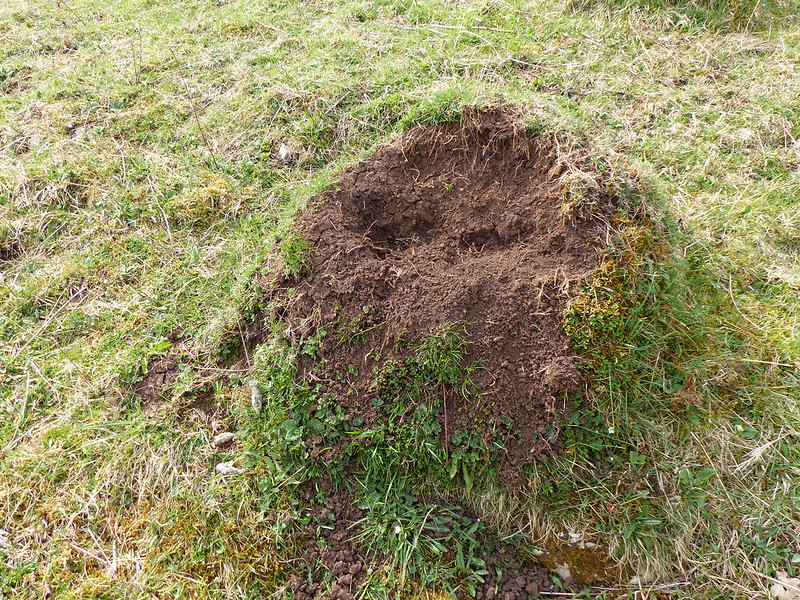 I don’t know what did the damage in this case, but it might have been a badger. This area seems to have a large population and not too far away we found… 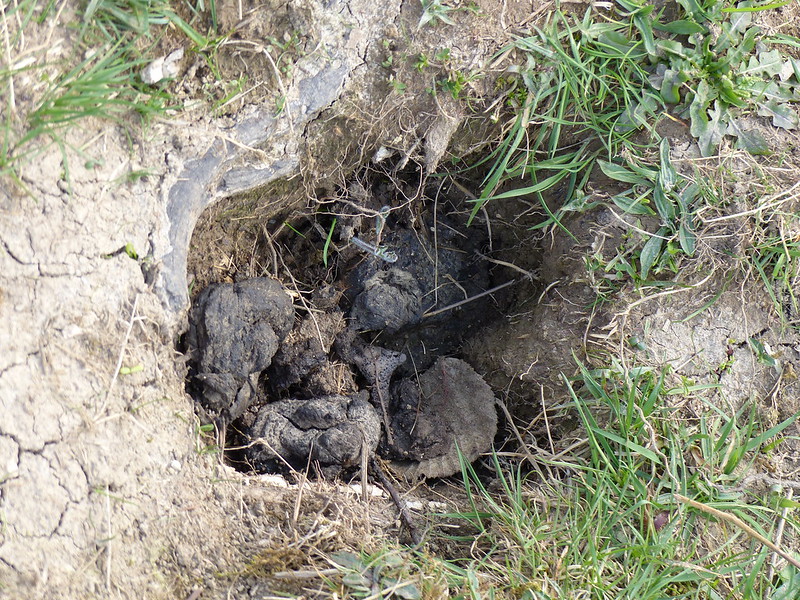 Although the partially destroyed mound had other scat… 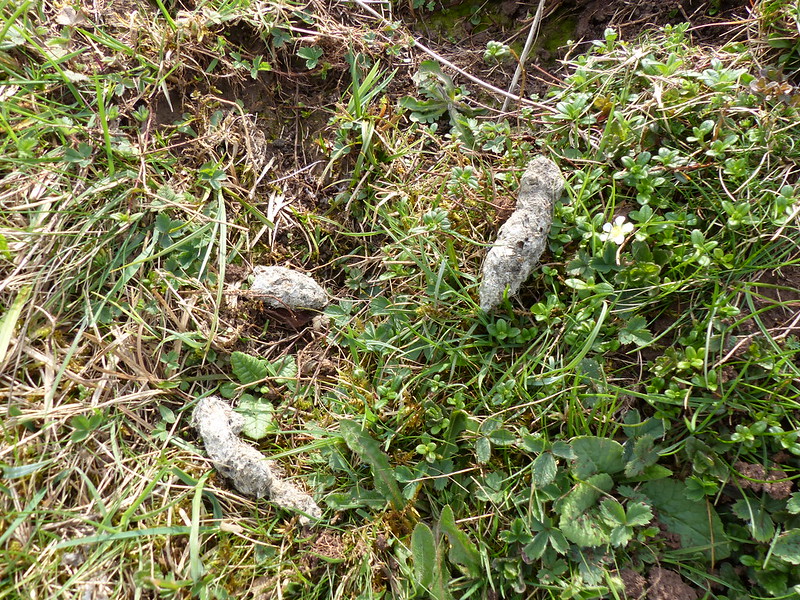 …on it too. Not sure what animal this is from.

Poke a couple of fingers into a mound and you’ll soon find a patrol of small defenders coming out to check you out…. 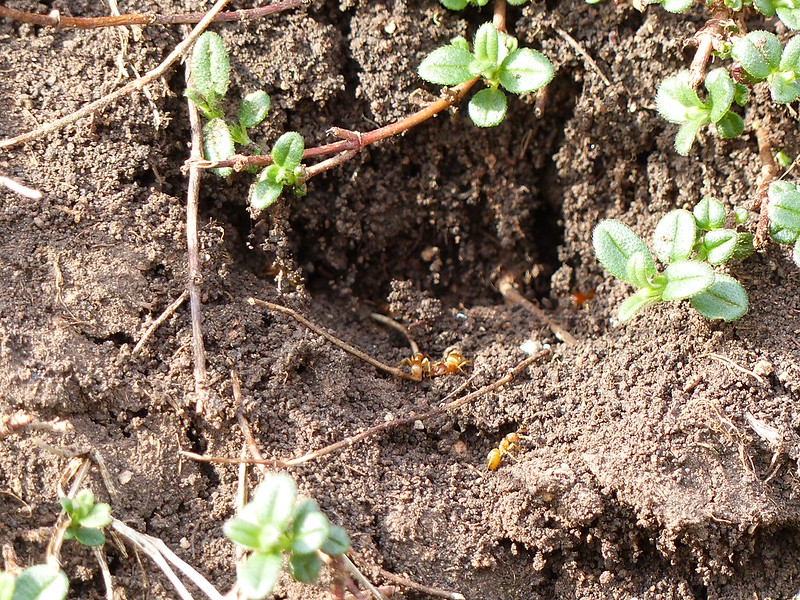 With the sun shining, and lots of wildflowers on show, there were quite a few bees about. I’m aware that many bees live in burrows. I’ve even seen them disappear into them occasionally. But one advantage of grubbing around looking at ant mounds for a while turned out to be an unexpected encounter with a bee. I noticed a bee, in a particularly fetching orange coat, land nearby and when I located it again was surprised to see that it was digging… 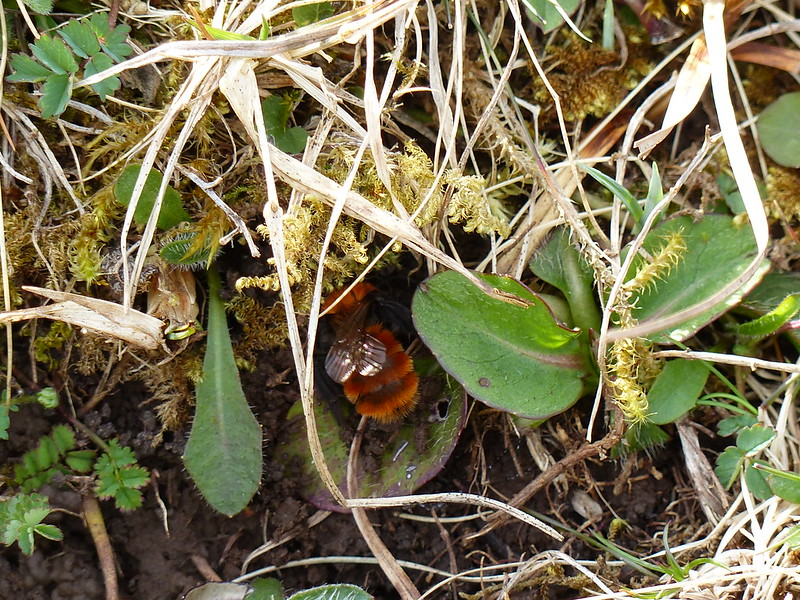 You can see the spoil it was kicking out onto nearby leaves with its hind legs. 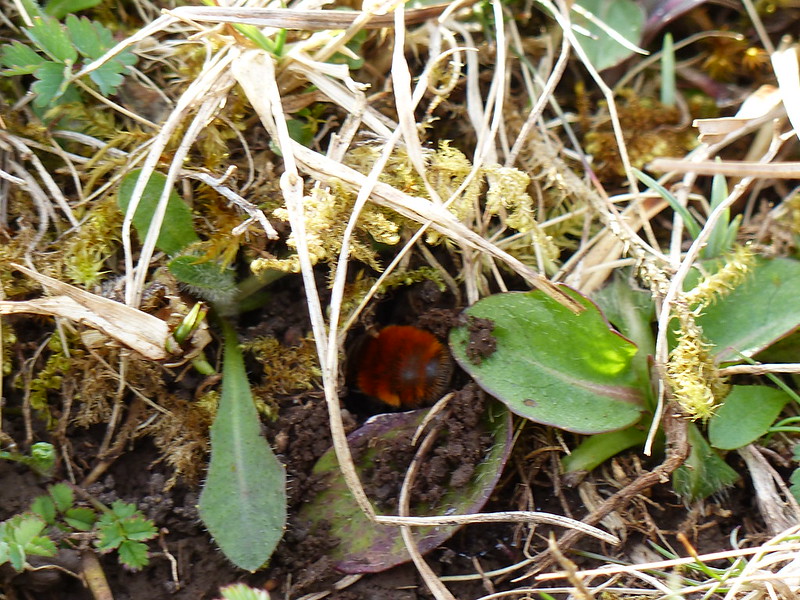 It had soon disappeared completely from sight. I’m going to tentatively identify this as a female tawny mining bee, which my ‘Collins Complete British Insects’ says ‘is unlikely to be mistaken for anything else’. I wished I’d watched for a while longer now because apparently, she, like the ants, builds a mound – ‘a volcano-shaped mound around her nest entrance’.

On the other hand, I don’t even have a tentative suggestion for these tiny white flowers which were growing on another ant mound. Any ideas anyone? 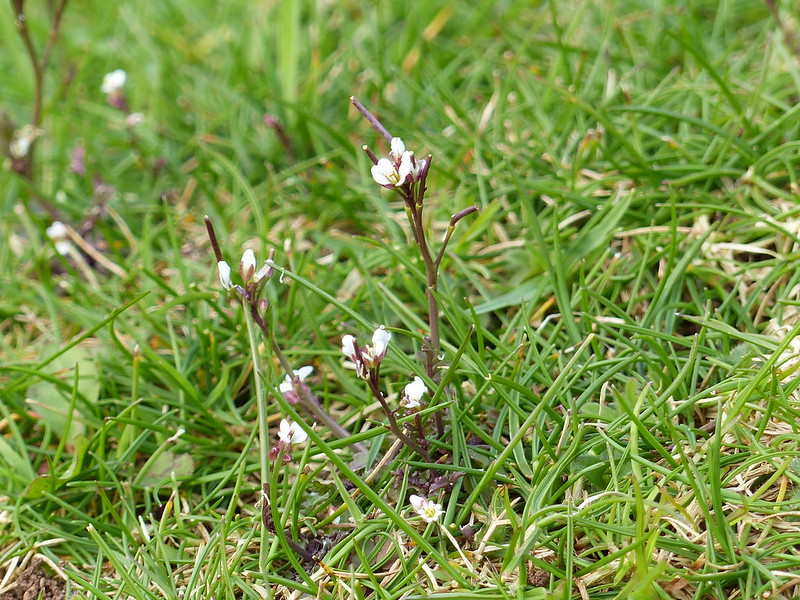 The blackthorn was finally beginning to blossom…. 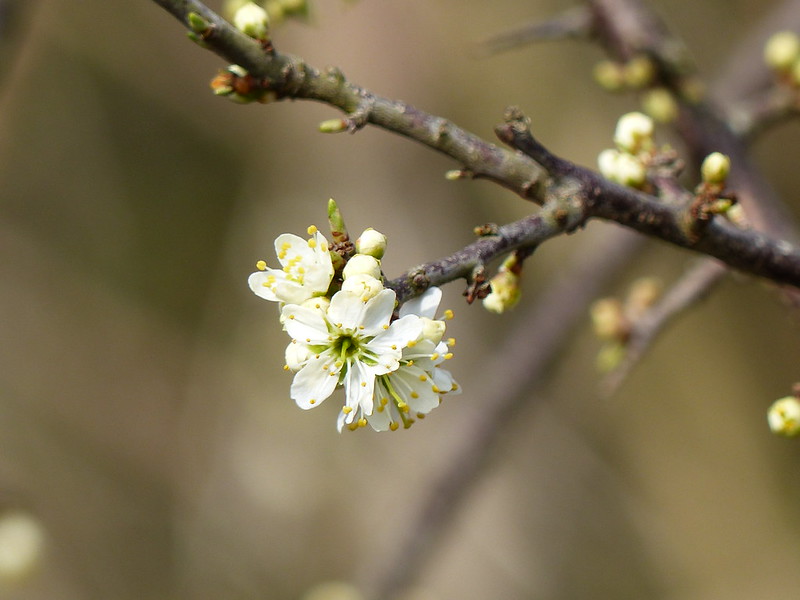 And a couple of buzzards were circling overhead. 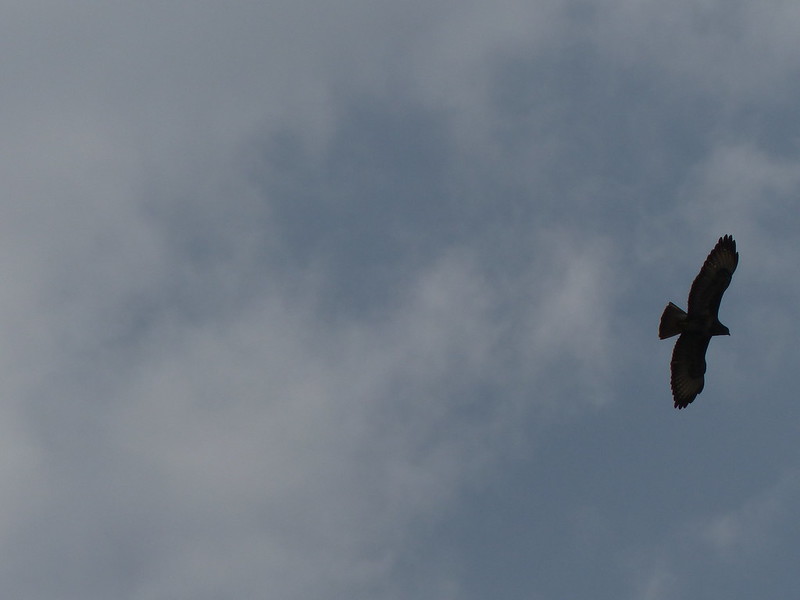 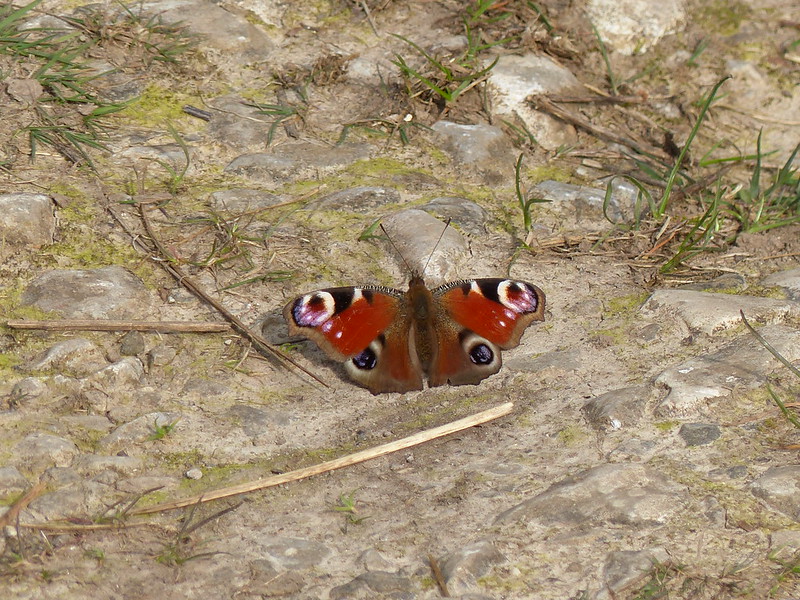 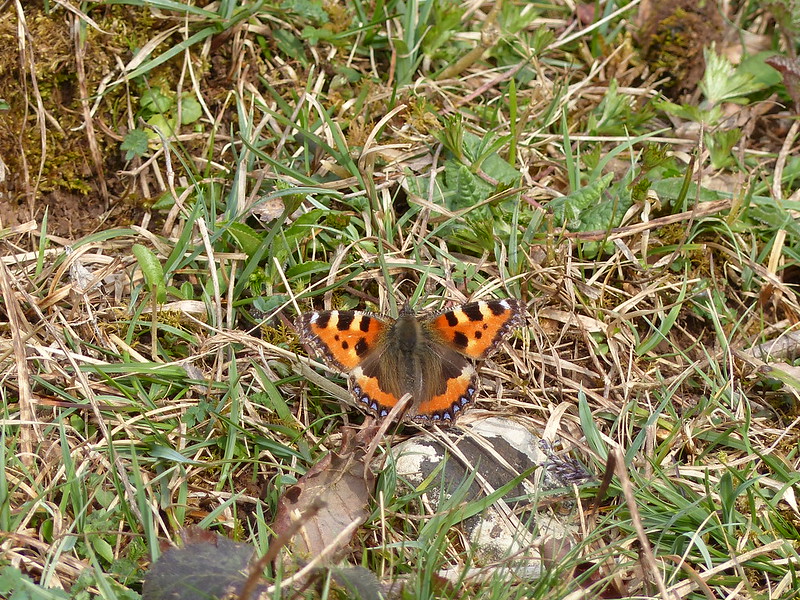 Terrific picnic that. Will have to do it again sometime.