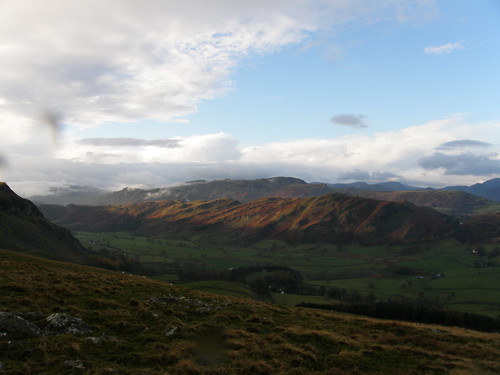 St. John’s in the Vale and Naddle Fell.

Long-suffering readers of this blog have probably come to realise that November and I don’t always see eye-to-eye. We aren’t exactly bosom-buddies. You might even say that I have a certain prejudice against November: I bear a grudge and no amount of comedy facial hair and feeble-pun-based name changes are ever likely to heal the rift. What is November? Autumn is pretty much over. Winter hasn’t really got going. The dark nights are drawing in, and……well:

the dark nights are drawing in
and your humour is as black as them
I look at yours, you laugh at mine
and”love” is just a miserable lie

from ‘Miserable Lie’ by The Smiths

The temptation is to succumb to some proper Morrissey miserablism and hide under a pillow until it’s all over.

Or, at least, that was what I thought. But this November unleashed an unbroken string of stunning Sundays (and some non-too-shabby Saturdays too) and I think relations might be defrosting somewhat. 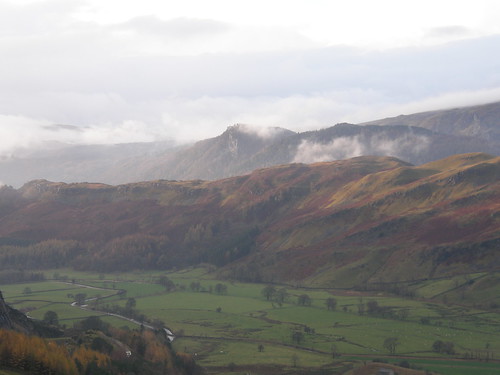 I got a reasonably early start: walking at around 8, parked up at Wanthwaite, St. John’s-in-the-Vale, almost opposite where the Old Coach Road emerges onto the modern B5322. Amongst the trees around the old quarries here were substantial flocks of birds – mixed flocks of tits, starlings, field fare etc. Also quite a lot of fairly large toadstools including several groups of the archetypal fly agaric with it’s scarlet cap and white spots.

There’s a path marked on the map which climbs towards Threlkeld Knotts, but I just followed the boundary on the north side of the quarries and then struck off uphill on a slightly diagonal line, assuming that my route would eventually intersect the path.

The view behind of the early light on Naddle Fell (or High Rigg depending on which authority you trust the most) gave me all the excuse I needed for frequent pauses for breathers.

Beyond Naddle Fell, Raven Crag, or at least I presume that it was Raven Crag, was rearing above of the trees, slightly cloaked by mist, looking rather mean, moody and magnificent. I think it must be a Birkett, and since I don’t know the northern end of that broad, Central Lakeland ridge which runs south from Keswick down, ultimately, to the Langdale Pikes, I made a mental note that I must come back and climb it some time.

Meanwhile, the fells in the North-West Lakes were almost completely cloud free, and would remain so, as far as I could tell, all day. (I can’t be sure because at times I was in the clouds myself and couldn’t see how things were progressing elsewhere.) 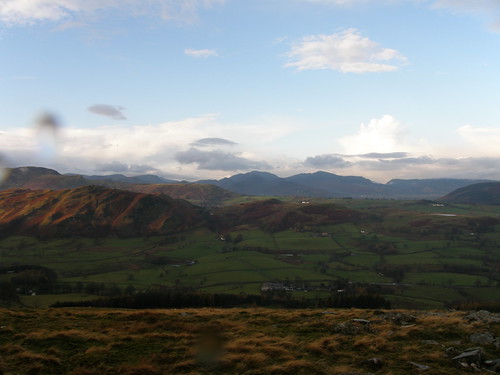 You can see that I had a few spots of rain on my camera lens. It was one of those sort of days – very changeable weather: fast-moving clouds, some of them low, rainbows, short sharp showers and plenty of sunshine too and all of that quite localised. A great day to be out in fact: if you can’t have wall-to-wall sunshine and pin-sharp views, well then this is, as far as I’m concerned, the next best thing. In fact, I’m sure that you could make a strong case for this being the very best kind of day.

A bit of luck is necessary though. A while back, I climbed Blencathra in cloud and rain. Clough Head was bathed in sunshine when I entered the cloud and still cloud-free, bright and sunny when I dropped below the cloud later. 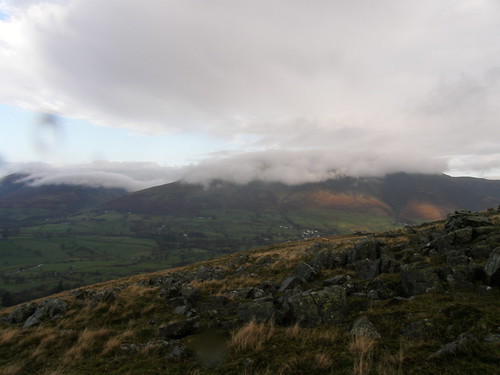 Today wasn’t too dissimilar: Skiddaw and Blencathra were capped with a mantle of cloud almost all day, only briefly appearing for one short interval.

On my climb toward Threlkeld Knotts I encountered a loose grouping of four fell ponies, which gives me an excuse for another photo of Naddle Fell catching the sun… 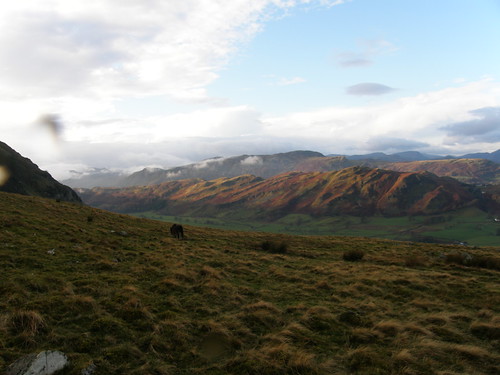 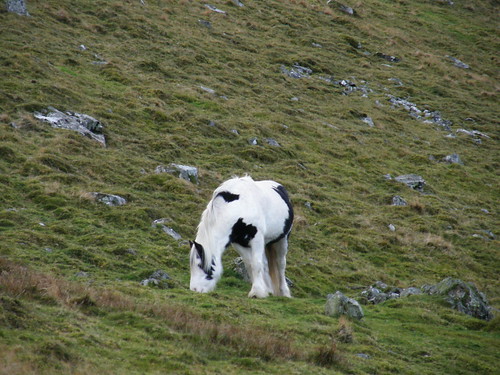 I finally met the path only to leave it again almost immediately on another path, not marked on the map, which took me to one of Threlkeld Knotts’ cairned tops, slightly below the knoll with spot height 514m which Birkett gives as the summit. 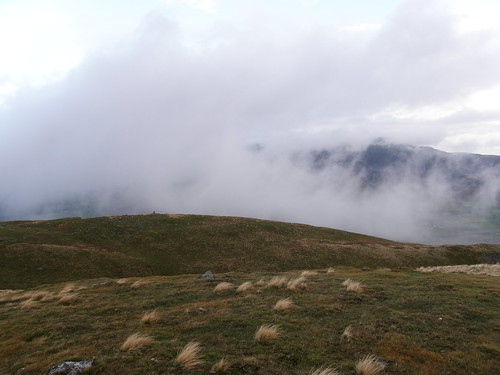 From the summit of Threlkeld Knotts. 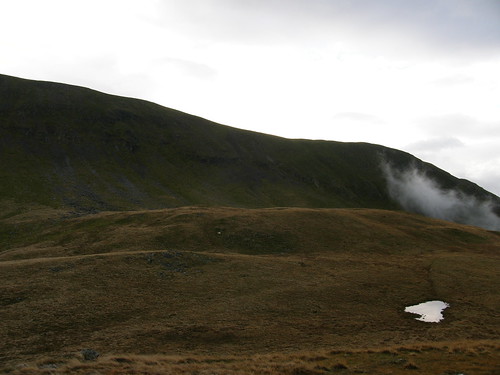 The face of Clough Head which towers over the Knotts is pretty steep, but the path – which you might be able to pick out in the photo above, rising diagonally from left to right – although loose in places, is a delight. Especially if the clouds are sweeping up the valley from Thirlmere and adding drama to the view behind….. 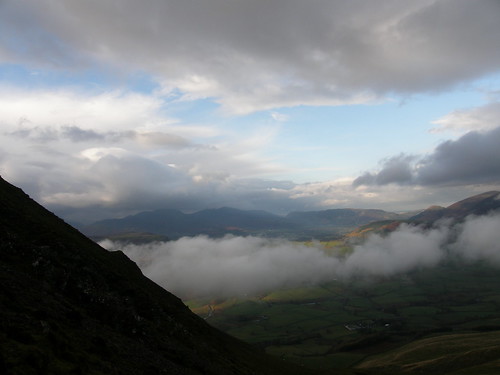 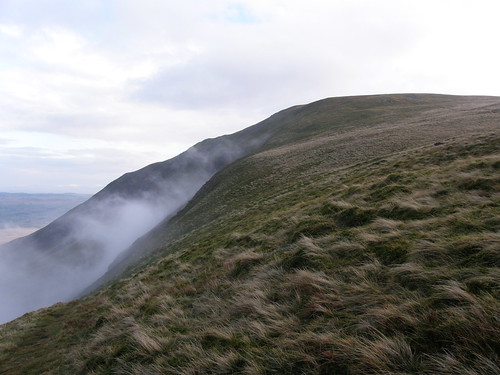 Emerging on to the shoulder of Clough Head. 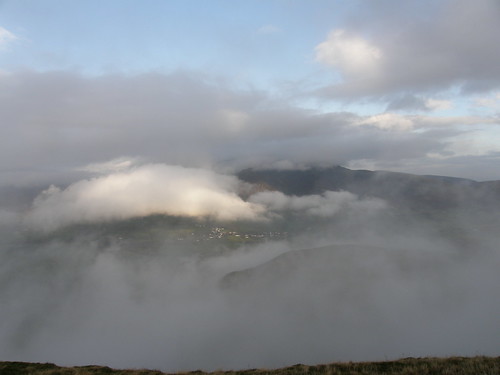 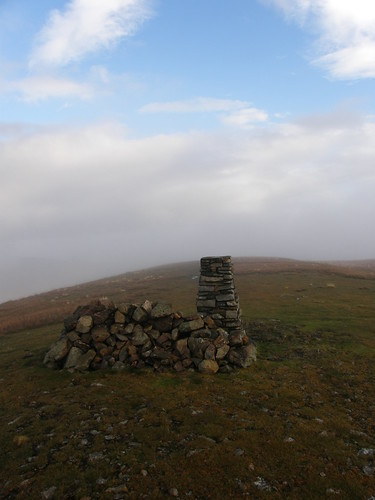 I didn’t have much of a view from the top of Clough Head, although the sky was still blue overhead. 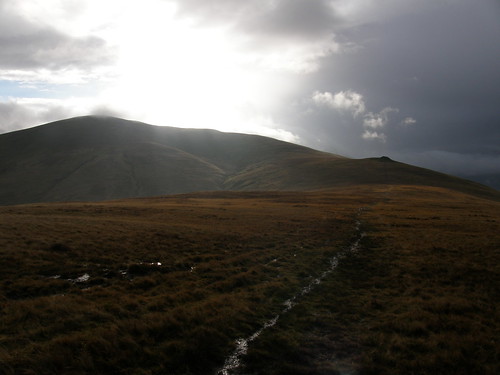 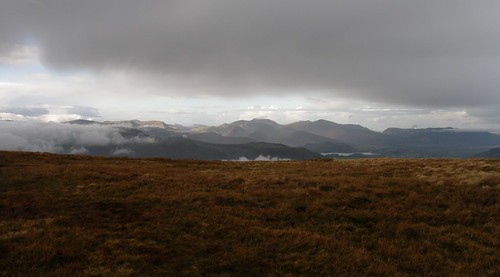 The weather was changing really rapidly now. Black clouds closed in and it began to rain more vehemently. But the North-Western Fells seemed charmed, staying relatively clear. I stopped at Calfhow Pike for a late breakfast and whilst I sat, the scene changed again… 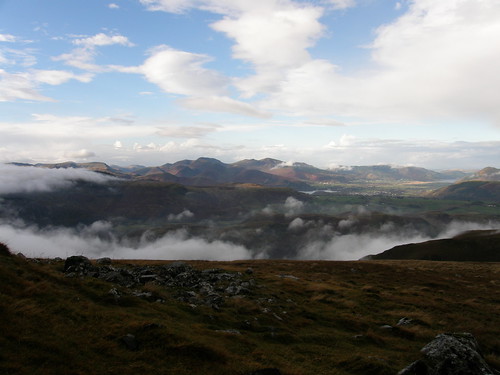 I’ve walked this ridge before, a couple of times I think, although not for many years, and I have to confess that Calfhow Pike has left no impression from my previous visits. The path bypasses it, so perhaps I didn’t visit at all. If you choose to come this way, I commend it to you: it’s only a little pimple really, but being rocky it has lots of nooks and crannies and I imagine that in all but the stiffest of winds you could, as I did, find a sheltered spot to get out of the weather for a brew and a bite to eat. (Boiled eggs, tomatoes and crispy bacon if you wanted to know. Or even if you didn’t.) 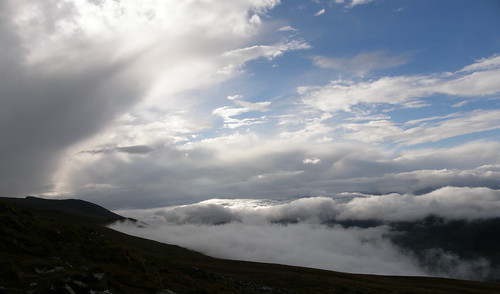 A blanket of cloud was advancing up the Thirlmere valley and putting on a free show. 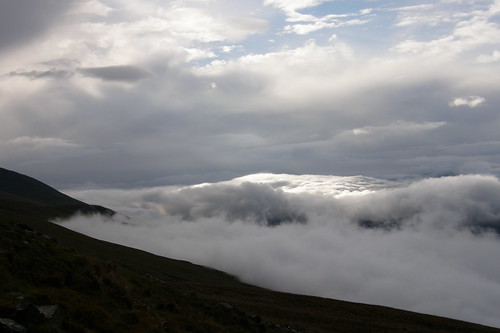 After the roaring success of my last little quiz (one response, could have been worse!) here’s a riddle for you:

I am the daughter of Earth and Water,
And the nursling of the Sky;
I pass through the pores of the ocean and shores;
I change, but I cannot die.

Too easy? Well, it’s not really a riddle anyway. It’s from ‘The Cloud’ by Shelley – the title might be a bit of a giveaway. But it struck me that it resembled the sort of thing Bilbo might have used to try to outfox Golem. 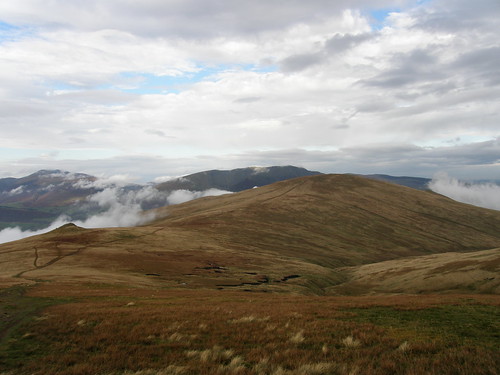 So, the point being – perhaps not emerging very clearly – the point being that, although I scour the forecasts hoping to see “100% chance of cloud free summits”, in point of fact, a few clouds, of the right sort, in the right places, can really enhance a view, and a walk, and a day, and the memories of that day. 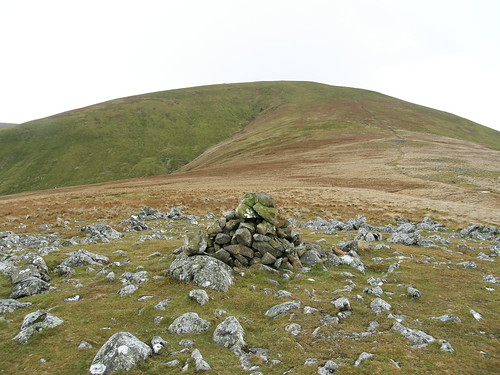 I didn’t spend long on Great Dodd, just enough time to visit both summit cairns and to say a brief hello to the only other walker I met that day on the hills. A fell runner had already passed me twice, once going up and once hurtling down again. Had I mentioned that these hills were deserted? Lake District hills. On a weekend. When the forecast was pretty respectable. Just goes to show – you can still find peace and quiet, even in the overcrowded Lakes. The Old Coach Road was a little busier, but I’ll get to that later.

You’ll notice that I’ve skipped all mention of Little Dodd, the third of five Birketts on this circuit. That’s because I didn’t notice Little Dodd. It’s a name vaguely spread-eagled across a broad shoulder and has no contours to call it’s own. One of those inexplicable ones.

The photo above is from the ‘summit’ of Randerside, the final Birkett of the day, also bereft of its own contours, but worth a visit for two reasons – firstly because, like Calfhowe Pike, it has a good deal of craggy rock with handy folds and clefts where shelter from the weather can be found – an opportunity I didn’t hesitate to take, and secondly because coming this way brought me down across Matterdale Common, an agreeably empty expanse, which I might otherwise not have thought to explore.

It had been raining again, but now things were looking promising, with sunshine lighting up the long ridge of High Street… 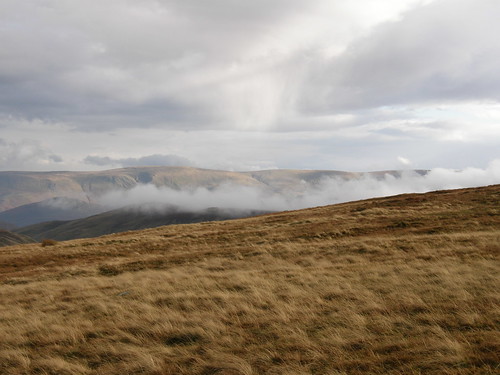 There’s a path across Matterdale Common, but I chose to wander off-piste, both for a gander at Wolf Crags, and to bag the small top at spot height 541m, to the east of Wolf Crags. I couldn’t remember whether that was another Birkett or not (it isn’t). You can surely understand my confusion – it has exactly the same spot height as Threlkeld Knotts, likewise has two contours of its own and actually feels more like a top in its own right. To the south, just beyond Groove Beck and Wham Moss (no – I’m not making this up), High Brow, also with two contours does get Birkett status. It’s all very arbitrary. But that’s fine. 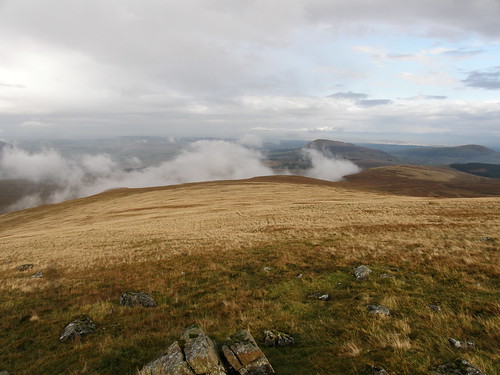 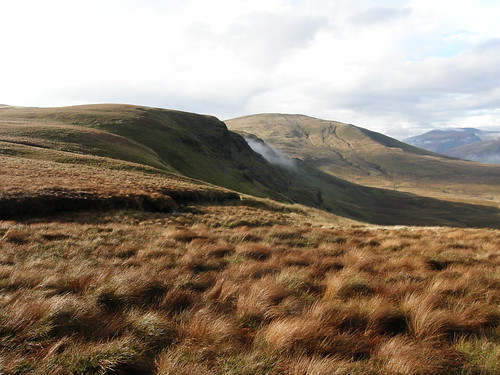 From the unnamed hummock, I dropped steeply down to meet the Old Coach Road – a busy thoroughfare, I met another walker and her dog, saw two more walkers on the track ahead of me and was passed, repeatedly, by three guys on trials bikes who seemed to be driving back and forth along the ‘road’. 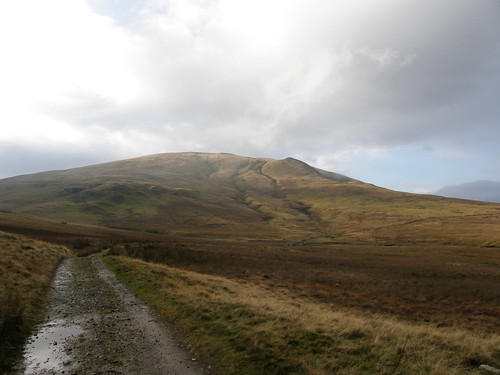 Now here’s another poser: that prominent ridge on the right-hand side of Clough Head rises to a little pointy peak – White Pike. Not a Birkett. Why not? 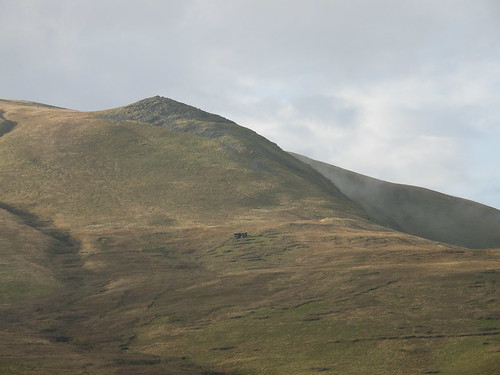 Anyway – it’s duly noted for my next ascent of Clough Head, whenever that might be.

Notice the old goods wagon below the pike – I know that some people treasure those. Even collect them. Irrational perhaps, but not any more so than ticking off Birketts whilst incessantly moaning about the odd choices in the listing. 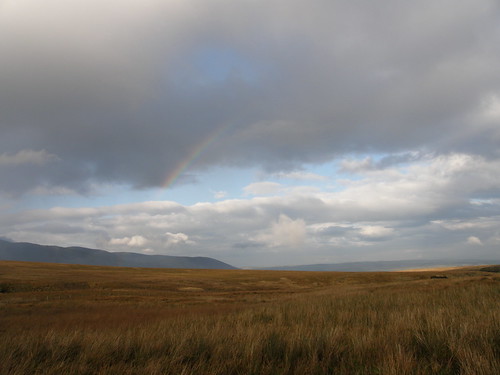 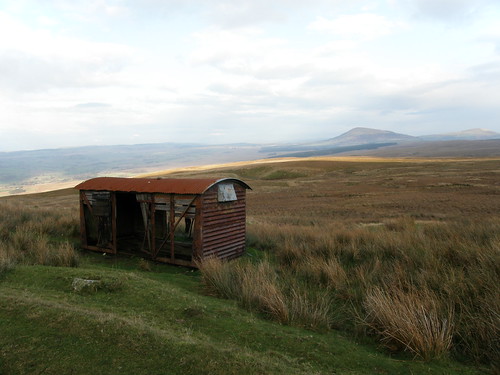 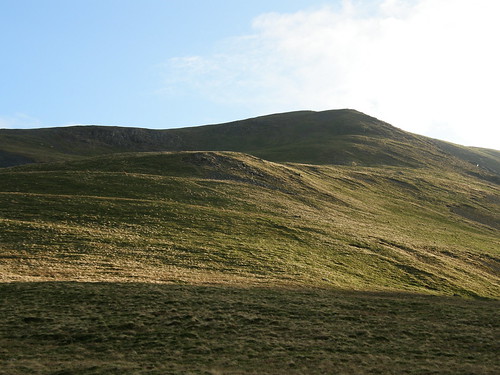 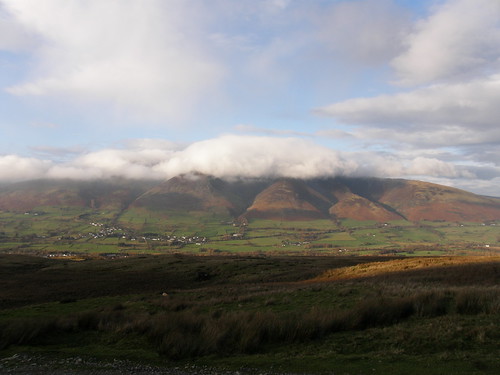 I was back to the car at around three, with a bit of daylight to spare, even accounting for the short, November days. This was my first proper hill outing for far too long: I hope that you can tell that I really relished it. And if November insists on snuggling up to me like this, well – we may even become friends.

You know, I sometimes think that November might be much misunderstood. Unfairly maligned. In fact, I don’t even know what it is that everybody seems to hold against it…..